Do you want to be happy?

This is a question I got recently from a client. I guess he won the prize of being my most skeptical client I have ever experienced. He was also incredibly intelligent. I am sure his IQ beats mine big time…but that’s no surprise 🙂

But his IQ was not the problem. It was the Emotional equivalent that was virtually absent. The feedback from people around him was clear: “This guy is not in tune with his feelings, not able to make deep connections with clients or at home and work-life balance looked more like work-work balance….

He came into the session contracted and challenged any idea consistently. He was the master of defensiveness. After a while, we hit the key underlying belief system that he grew up with: Success means to make an impact and the strategy to make more impact is to work harder!

Being happy was never part of his definition of success. Extrapolate that for 30 years and you can imagine where he ended up: incredibly productive, miserable and children that hardly know who their father is…..

He is not the only one. World-known executive coach Marshall Goldsmith recently invited three of his CEO clients to ask themselves every day: Did I do my best to be happy today?

The first time they heard that question they were dumbstruck. It absolutely never dawned upon them to consider their own happiness as something of priority.

As for with my client, if anything, happiness was a pleasant spin-off for them, but it’s certainly wasn’t an important practice. Like many of us in the West, he grew up with the 3-step belief system:

Sounds familiar? If that is the case, ask yourself honestly how that belief system is working out for you thus far?

The turn-around in our coaching process was the moment that he considered that happiness was something that was worth exploring. He also realized that when he was happy and content, he became more effective especially with leading others from inspiration.

Suddenly the defensiveness and skepticism decreased. The coaching accelerated and insights came in from left, right and center.

He left with a strong intention to dive into the deep-end and start ‘practicing happiness’ instead of ‘pursuing happiness’ in a variety of ways with techniques and tools that work for him.

My big take-away is that our entire mindfulness-based philosophy is built upon the assumption that people actually want to be happy! If that intention is not there, it’s harder for me to coach people.

I can try to convince them of the pay-off of being happy, but it is not about the intellectual proof. Dozens of studies have shown that happy people become more successful, but that doesn’t matter. It’s what we programmed when we were young or in our early career that matters.

And to shake and transform such foundations takes time. And it’s scary.

People need support, motivation and confidence to gradually experiment with such a shift over a period of time. That’s what coaching is all about…

In pain? Don’t make it bigger than it is

Adrenalin-energy, a long-term risk for execut...

To thrive we need a strong back and soft fron... 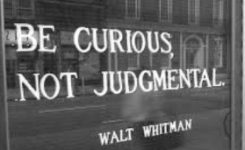 The most important thing in life….

How to manage your leadership ...

How to manage your leadership ...